IEC 61850 is the backbone for the Smart Power Automation and Control Systems (PACs). IEC 61850 standardizes the data model, the multiple communication services, the system configuration description language (SCL) and even the link layer for the networking and for synchronization. An intensive effort of the IEC 61850 community and industry has been developed to provide a zero-delay and no frame lost Ethernet based networking solution for critical control messages communicated within these systems (like GOOSE or SMV messages).

HSR and PRP in Power Automation and Control Systems

HSR and PRP are layer 2 protocols, but there is a big difference between them. The difference is that HSR adds an HSR Tag to the Ethernet frame, so all devices on the ring network must be able to understand HSR.

HSR provides redundancy by sending packets in both directions through a ring network topology and discarding the duplicated one on HSR capable reception node. In case of an interruption in the ring, the frame will always be received through the other port.

As an example, if node A wants to send a message to node B, it duplicates the message and sends it in both directions of the ring

PRP adapted nodes are connected to two independent Ethernet networks (two independent LANs) and send the frame over both networks. This grants the reception of the frame through when any of the network fails.

One of the major advantages of this protocol is that it is transparent to the network, meaning that PRP and non-PRP devices can communicate with each other. 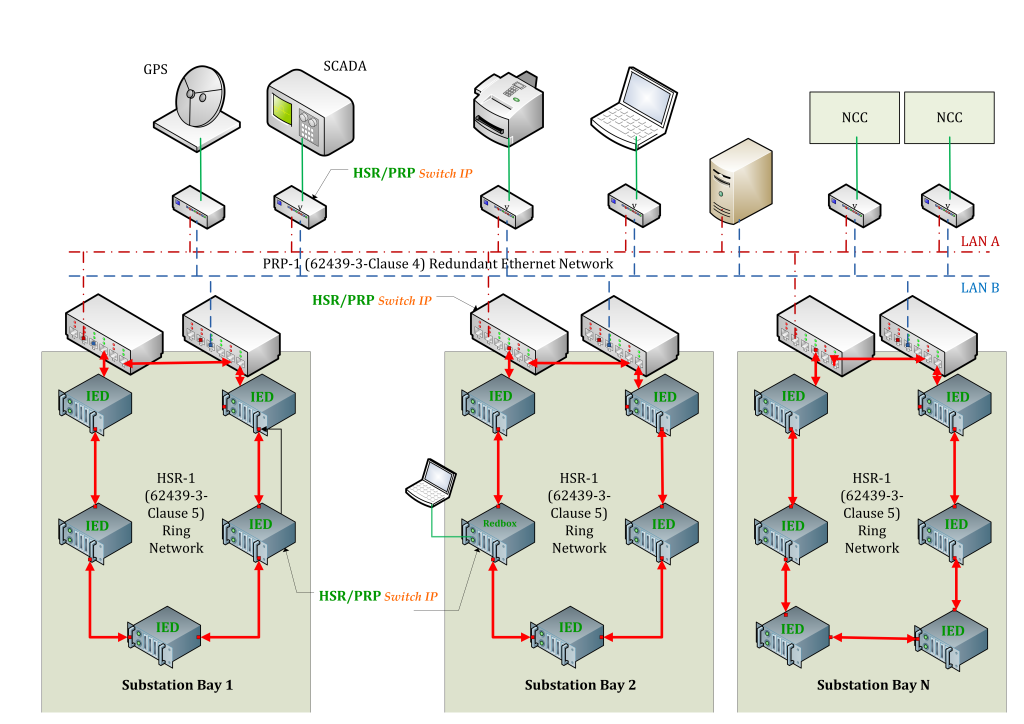 As can be depicted in this example, in order to maintain redundancy in the communications, the interconnection between PRP and HSR networks is performed using redundant gateways. Each HSR link is connected to each PRP LAN using two gateway devices. Thus, a potential ‘Single-Point-of-Failure’ is avoided.

As it has shown in this scenario, the combination of industrial protocols is increasing in complexity and variety. The need for flexibility of these emerging Ethernet based protocols makes FPGA and reconfigurable devices in general, the best candidates to implement network devices able to combine multiple protocols. FPGAs,  powered by the proper IP Core  provide:

Since 2011, SoC-e is providing these technologies to companies of the Electric Sector that have integrated SoC-e IPs and modules in IEDs, Merging Units, RTUs and in many other equipment. Among other products, the following SoC-e products target the Electric Sector:

Apart from IP Cores, we also develop Networking Modules or SoMs, specially developed for these kind of applications. For Power Automation and Control Systems we have the SMARTzynq, based on a 7-Series Zynq device, or the SMARTmpsoc, based on an Ultrascale+ Zynq device.