SpaceWire protocol is a standard for high-speed links and networks for use on-board spacecraft, easing the interconnection of sensors, mass-memories, processing units and downlink telemetry sub-systems. It is a full-duplex, bidirectional, serial, point-to-point data link. It encodes data using two differential pairs in each direction.

The SpaceWire RDDP may be applicable to many aerospace microelectronics devices like Spacecraft systems, Bus systems and Embedded microcontrollers. This evolution of this standard for  Spacecraft communication networks is coordinated by the European Space Agency (ESA) in collaboration with international space agencies including NASA, JAXA, and RKA.

SpaceWire offers several significant advantages over other communication technologies, and the main advantages of this protocol are:

It initially served as an interface between instruments and mass memory for on-board storage of spacecraft telemetry. It became popular in space applications because of its simple circuitry, low power consumption and low error rate. Right now, it is widely used by many space companies.

SpaceWire was standarized in 2003: ECSS-E-ST-50-12C. In this sense, SpaceWire. In order to make a more complete solution, SpaceWire has been complemented with a set of standards for higher protocols that support SpaceWire on-board data handling networks. These standards are:

There are several advantages of using SpaceWire instead of Ethernet on space communications. Networks on spacecraft tend to be small and with a low failure rate. Ethernet usually comes into play with TCP/IP protocol, a heavyweight protocol which is designed to transport data between multiple networks. The minimum header size of the packet is 40 bytes, which is a huge overhead if small amounts of data are sent.

Another of the main reasons to use SpaceWire instead of Ethernet on space communication would be reliability. SpaceWire protocol uses Data strobe encoding, (or D/S encoding) encoding scheme . This encoding scheme uses two signal lines, Data and Strobe. These have the property that either Data or Strobe changes its logical value in one clock cycle, but never both. This allows an easy clock recovery with a good jitter tolerance by XORing both signals. 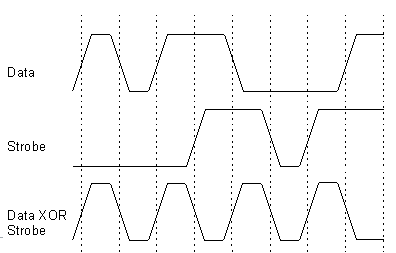 In addition, PLLs (Phased Locked Loops) that are used in Ethernet or USB communications, are one of the first systems to fail due to radiation.